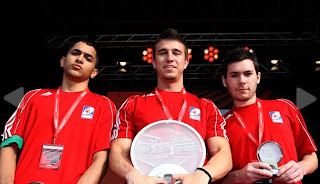 Nenad Stojkovic from the United States of America won the FIFA Interactive World Cup 2010 Grand Final in Barcelona today (Saturday, 1 May 2010), thus becoming the FIFA Interactive World Champion 2010. The world’s 32 best virtual footballers came face to face at Port Olympic in Barcelona, Spain to compete in the Grand Final as another incredibly exciting virtual football season came to an end.
Following a day of extreme skill and tactics on EA SPORTS™ FIFA10 on PLAYSTATION®3, Stojkovic beat Ayhan Altundag from Germany 2-1 in a highly entertaining final in front of a packed crowd next to the beach at Port Olympic. With 1-1 at half time, Stojkovic scored the decisive goal of this tactical encounter at the 75th minute of the final. In addition to being crowned the FIWC10 Champion, Stojkovic also received $20,000 USD. He will also receive his FIFA Diploma at the next FIFA World Player Gala where he will rub shoulders with the best real life footballers in the world.
“Two days ago, I was dreaming I could make it and now that I have succeeded, I can say this is probably the happiest day in my entire life. During the final, I tried to remain calm and I did not want to celebrate my goals on stage. My opponent was really good. This is amazing. It is worth being here but please do invite me as the winner next year as the qualifiers are too difficult!”
The Grand Final provided players with the opportunity to perform on the biggest stage of their lives in front of 11,000 spectators who enjoyed the entertainment that the world’s largest football gaming tournament provides.
“The FIFA Interactive World Cup is breaking records every year, with more than 775.000 online participants in this 2010 edition. Today we have seen the best virtual football players in the world compete for the champion’s title in a fantastic Grand Final in Barcelona, where not only the participants, but also the fans enjoyed a truly unique event”, said FIFA Executive Committee member Chuck Blazer.
“I am always amazed when I see these players in front of the consoles. It is just unbelievable what they can achieve with the players that look so close to the characters.” added former Barcelona and Holland star Patrick Kluivert, Ambassador of the FIFA Interactive World Cup Grand Final Barcelona 2010.
“The thrilling showdown today at Port Olympic was a fantastic end to this year’s competition with Stojkovic proving to be a very worthy champion,” said Matt Bilbey, Vice President Football, EA SPORTS. “The FIFA Interactive World Cup 2010 has seen the strongest ever field of competitors in its history and to emerge victorious from over three quarters of a million entrants is no mean feat, congratulations!”
"The FIFA Interactive World Cup 2010 has been a huge success and we offer our warmest congratulations to the winner Stojkovic," said Darren Carter, Vice President, Consumer Marketing, Sony Computer Entertainment Europe. "To have had over 775,000 entries for this year's competition clearly shows how the combination of the growing popularity of PlayStation(R)Network on PlayStation(R)3 with FIFA 10 is something that taps into this community unlike anything else."
Spectators were able to enjoy a guest appearance from Patrick Kluivert who entertained the crowd by taking part in a virtual exhibition match versus Spain’s beach soccer star Ramiro Amarelle. Other entertainment on display included exclusive performances by football tricksters John Farnworth and Jesus Gomez, Live performances by Batacuda and a headline DJ set by Andy Cato - Groove Armada.
Throughout the day spectators were also able to take part in various real and virtual activities including a mini beach soccer tournament that was run by Spain’s Beach soccer star and the FIFA Beach Soccer World Player 2008 Ramiro Amarelle and his fellow countrymen Nicolás Caporale and Roberto Mato. The Gaming Lounge and Entertainment Lounge remained busy throughout the day as the public enjoyed experiencing EA SPORTS latest gaming titles and PlayStation’s latest next-generation entertainment products.
After 7 months of qualification with over 775,000 players having competed in the online qualification and at 10 Live Qualifier Events that took place around the globe including South Africa, Denmark, Brazil, Japan and Australia, the Grand Final marked the end of the sixth and most successful FIFA Interactive World Cup to date.
For more information on the FIFA Interactive World Cup, including a list of the 32 finalists, please go to www.FIFA.com/FIWC
Footage and Images of the FIFA Interactive World Cup Grand Final can be found on the FIFA Media
Channel http://media.fifa.com
en 19:05